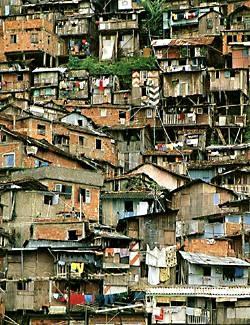 The first favela, or hillside shantytown, appeared on the outskirts of Rio De Janeiro over 100 years ago.

In the late 18th century, the first settlements were called bairros africanos (African neighborhoods), and they were the place where former slaves with no land ownership and no options for work lived.

Over the years, many freed black slaves moved in. However, before the first settlement called "favela" came into being, poor blacks were pushed away from downtown into the far suburbs.

Most modern favelas appeared in the 1970s, due to rural exodus, when many people left rural areas of Brazil and moved to cities. Without finding a place to live, many people ended up in a favela. Despite numerous official attempts to eradicate these hand built renegade suburbs, housing the poorest of the poor, they have multiplied over the past century.

Today there are more than 600 favelas, where one in five Rio residents lives. São Paulo also has a large number of favelas.

The favelas are units of irregular self-constructed housing that are occupied illegally. They are usually on lands belonging to third parties, and most often located around the edge of the cities, often crowded onto hillsides. Residences are built without permission or a license and are often disorganised, without numbered streets, sanitation networks, electricity, a telephone service or plumbing. In recent years favelas have been troubled by drug-related crime and gang warfare. In the past the authorities have taken a number of steps to reduce problems in favelas. They have set up self-help schemes, with the local authority providing local residents with the materials, such as breeze blocks and cement, needed to construct permanent accommodation.

Our program demonstrates love through supporting the transformation of society in education, healthare, government, economics, art, and other aspects. Understanding the need for structural changes in society as a whole, our program redirects focus on human quality. Unfortunately, the majority of the Brazilian population lives in unjust social and economic structures.